The fauna Of Kamchatka 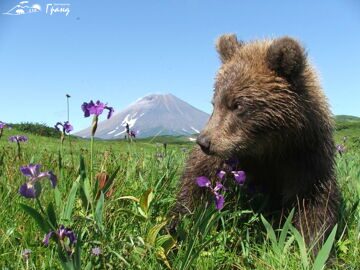 boasts diverse and abundant wildlife. This is due to climates ranging from temperate to subarctic, diverse topography and geography, many free-flowing rivers, proximity to highly productive waters from the northwestern Pacific Ocean and the Bering and Okhotsk Seas, and to the low human density and minimal development. It also boasts the southernmost expanse of Arctic tundra in the world. Commercial exploitation of marine resources and a history of fur trapping has taken its toll on several species.
Kamchatka's isolation for many years helped protect a healthy and stable wildlife population with 37 species of mammals. The value of the peninsula species diversity is stipulated by its uniqueness. Such factors as the geographic isolation and volcanism impact influenced the unique nature communities formation and species diversity. A lot of animals and plants in the other regions of Russia are either extinct or endangered, included into the local Lists of Rare and Endangered Species. In Kamchatka 125 vascular plants, 23 mammals, 60 bird species, and 30 fish species are included into the List of Rare and Endangered Species of Kamchatka.

The symbol of Kamchatka and the Yelizovo District is the brown bear (Ursos arctos). Kamchatka has the highest concentration of bears in Russia. Imagine a peninsula with 14,000 rivers and streams most of which support salmon spawning and it is clear that Kamchatka's salmon provide the needed food base for this abundance of bears. Added to this abundance is the unusually long spawning season of some of the salmon for example sockeye, which spawn from July to March. It is said that there are no more huge 20 year old bears left on Kamchatka after over 10 years of big game hunting and hunting for gall bladders to be sold for Asian medicines. Still a big bear reaches 600 kg (375 pounds) and 2.5 meters from head to toe. Some of the other mammals on Kamchatka include: sable, mink, wolf, red fox, reindeer, moose, lynx, river otter, marmot, ground squirrel, tree squirrels, ermine, and wolverine. The peninsula is the breeding ground for Steller's sea eagle, one of the largest eagle species, along with the golden eagle and gyr falcon.
Kamchatka contains probably the world's greatest diversity of salmonid fish, including all six species of anadromous Pacific salmon (chinook, chum, coho, seema, pink, and sockeye). Biologists estimate that a sixth to a quarter of all Pacific salmon originates in Kamchatka. Kuril Lake is recognized as the biggest spawning-ground for sockeye in Eurasia. Тhe highly productive waters of the northwestern Pacific and the Okhotsk Sea include: orcas, Dall's and harbor porpoises, humpback whales, sperm whales and fin whales. Less frequently, grey whales (from the Eastern population), the critically endangered North Pacific Right Whale and Bowhead Whale, beaked whales and minke whales are encountered. Blue whale are known to feed off of the southeastern shelf in summer. Among pinnipeds, Steller's sea lions, northern fur seals, spotted seals and harbor seals are abundant along much of the peninsula. Further north, walruses and bearded seals can be encountered on the Pacific side, and ribbon seals reproduce on the ice of Karaginsky Bay. Sea otters are concentrated primarily on the southern end of the peninsula.
Seabirds include northern fulmars, thick and thin-billed murres, kittiwakes, tufted and horned puffins, red-faced, pelagic and other cormorants, and many other species. Typical of the northern seas, the marine fauna is likewise rich. Of commercial importance are Kamchatka crab, scallop, squid, pollock, cod, herring, halibut and several species of flatfish.