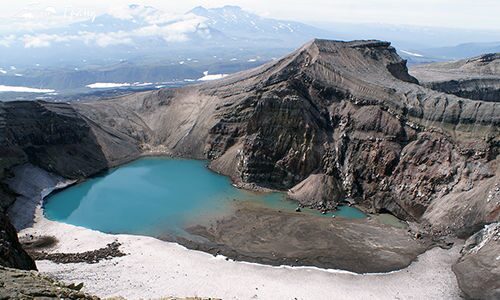 Synonym: Gorely khrebet, Gorelaya sopka, Pravaya Mutnovskaya, Vtoraya Mutnovskaya.
Location. Coordinates of the summit: 52°27'N, 158°07'E.
Geographic position. The volcano is situated in Southern Kamchatka 75 km southwest of Petropavlovsk-Kamchatsky. The region is a slightly uplifted and tilted westwards and southwestwards plateau of Lower Quaternary basalts and andesite-basalts 800-1000 m above sea level. The volcano belongs to a zone of conjunction of the eastern horst-anticlinorium with the Tolmachevo depression. The conjunction follows stepped submeridional faults with vast extrusions and numerous cinder cones of variable ages.
Morphology and structure. The structure of the volcano consists of two parts: an older and a present one. The older structure is shield-like, with a 13X12 km caldera at the centre. Basalts form the lower part of the pre-caldera section, andesites in the middle parts of caldera flanks and extrusions in the southern and less in the northern sectors of the ancient volcano. Dacites and rhyolites are exposed in the uppermost section of cauldron flanks or form extrusions in the southwestern and eastern sectors of the caldera Ignimbrites, welded tuffs and pumices occur in the upper section in the eastern, northern and western flanks of the caldera and com¬pose the entire surface of the ancient volcano, and are traced in a thick sheet from the centre to the periphery for over 15-20 km. Together with the pit of the caldera, the overall area occupied by ignimbrites is about 600 km2. They range in thickness from 5-30 m in the cauldron flanks to 300-350 m at the periphery, in particular in the margins (upper reaches of the Karymchina, Paratunka, Zhirovaya rivers and in Opasny ravine). The total volume of pyroclastics, together with those buried inside the caldera, is 100 km3 (Figs 179-180).
The present volcano is a huge structure with 11 craters at the summit and 30 on the slopes. The slopes of the cone are covered with extensive flood lava flows.
Tephra-chronology method has shown that there have been at least 3 major eruptions in the last 2000 years that ejected 10 to 20 mln. m3 of tephra.
In the last 600-650 years, the Vulcanian type of eruptions were joined by phreatic eruptions with typical ejection of coarse clastic resurgent material. It was deposited in a layer at the western and northwestern foot of the volcano. Two such explosions occurred 600-650 years ago and in the 18th century. It is possible that since the 18th century, a new eruptive cycle set in with eruptions every 50-100 years. Together with weak eruptions, the interval is reduced to 4-60 years. A major phreatic eruption was observed in 1980-1981; and weaker ones in 1984-1985. The main erupted product was water thrown out as steam at a rate from 5 to 15 tons/sec. This may suggest a stronger explosive eruption in the near future. From “Active volcanoe of Kamchatka”