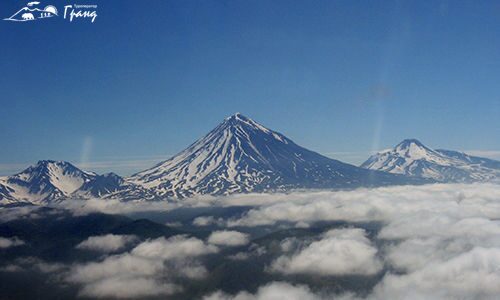 Koriaksky volcano (3456 m), along with Avachinsky, is located in the immediate vicinity of the cities of Petropavlovsk-Kamchatsky (28 km) and Elizovo (25 km) as well as of the Elizovo international airport. Numerous populated sites and farms are located still closer to the volcano.
The onset of the Koriaksky volcano formation is dated back to the Late Pleistocene time. Based on the geological evidence Koriaksky is a little bit older than Avachinsky. In Early Holocene the peaks of Koriaksky activity exactly fit into repose periods of neighbouring Avachinsky volcano. At this time, Koriaksky produced andesitic lava flows, pyroclastic flows and minor ashfalls. Later eruptions produced mostly andesitic and basaltic andesite lava flows from the vents on the slopes of the volcano.
In the course of the 19th-20th centuries Koriaksky volcano produced only weak phreatic eruptions and episodically enhanced its fumarolic activity. The last weak phreatic eruption took place in 1956-1957. In early 1994 an anomalous growth of seismic activity was registered beneath the volcano. The processing of digital data on this seismic swarm resulted in the identification of specific earthquakes probably indicating the places of fresh magma intrusions.
Holocene erupted products of Koriaksky are dominantly moderate-K andesites and basaltic andesites.
Koriaksky volcano can be seriously hazardous even in case of a moderate eruption. Considering a 3000 yrs-long dormancy since the last strong eruption, the next eruption is likely to be rather strong and will cause ash-falls and lava flows. The latter will be accompanied by forest fires in summer and by lahars in any season.