Kamchatka. Flight to the valley of geysers & Uzon caldera!! 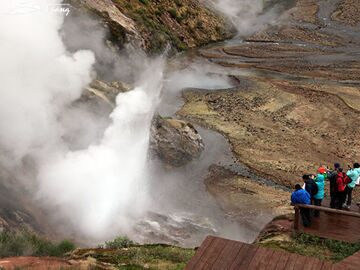 of Geysers is the only geyser field in Eurasia (apart from the Mutnovsky geyser field) and the second largest concentration of geysers in the world. This 6 km long basin with approximately ninety geysers and many hot springs is situated on the Kamchatka Peninsula in the Russian Far East, predominantly on the left bank of the ever-deepening Geysernaya River, into which geothermal waters flow from a relatively young stratovolcano, Kikhpinych. Temperatures have been found to be 250 °C, 500 m below the caldera ground. It is part of the Kronotsky Nature Reserve. The valley is difficult to reach, with helicopters providing the only feasible means of transport.
A Soviet postage stamp from 1966. The "pulsating" geysers of Kamchatka were discovered by a local scientist, Tatyana Ustinova, in 1941. She published her findings fourteen years later, but there was little exploration of the area until 1972. A systematic survey was undertaken in the mid-1970s, and an automatic monitoring system was introduced in 1990. Over thirty geysers were given names; among these was the Giant geyser (Velikan), capable of producing a jet of water reaching up to 40 meters. From the 1980s, the area was promoted across the USSR as one of the tourist magnets of Kamchatka and the Russian Far East. Foreign tourists were allowed into the valley in 1991. About 3,000 tourists visited the site annually.
Volcano Uzon caldera was formed about 40000 years ago as the result of giant volcano destruction caused by a series of explosive eruptions. The caldera is a 150 sq. km. basin surrounded by steep rock walls. There are five thermal fields with thousands of spouting springs within the caldera, though there was no pulsating geyser up until now. Scientists are observing the recently erupted geyser and hypothesizing as to its origin. The pulsating source has not yet been named.
For anybody visiting the Valley of Geysers for the first time, it`s difficult not to fall the impression that he is watching some strange performance – a performance with fantastic scenery, a non-stop show with brilliant and indefatigable actors, directed by a mysterious but infinitely talented Director. The only thing that the ecstatic spectator should remember is to stay away from the “Stage”. 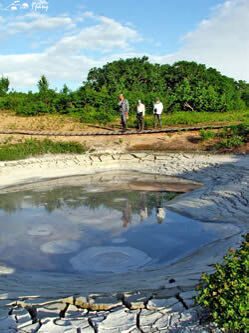 You will have an opportunity, by trying yourself, to effect beautiful picture of geysers. This itinerary takes you to one of the most remote parts of the world. Please also note that weather circumstances may change the day of excursion as to take advantage of good weather.
The flight takes about one hour and fifteen minutes, three hours are spent in the Valley and then there is a lunch after which you return to heliport in Yelizovo.

Transfer to heliport & back