The best on Kamchatka!

Our helicopter tour is among the most breathtaking adventures available on earth. Although the natural landscape of Kamchatka is breathtaking from any angle, helicopter tour gives you access to some of the most untouched and wild beauty in the world. No matter what you're looking for, our helicopter tour provides the perfect opportunity to go places and see sites that only exist in most people's imaginations. Booking this air tour will show you all the parts of Kamchatka that you can only dream about. An adventure you`ll never forget!

Arrive in Petropavlovsk-Kamchatsky. Fly around Avachinskaya group of volcanoes to the Valley of Geysers and caldera of Uzon Volcano. Rest and unwind in Tumroki resort. Fly-around Kluchevskaya group of active volcanoes. Flight to Esso for refill, then to the Storozh river for fishing. Bear viewing excursion on Kurilskoe Lake. Avacha Bay Boat Excursion. Departure for home. 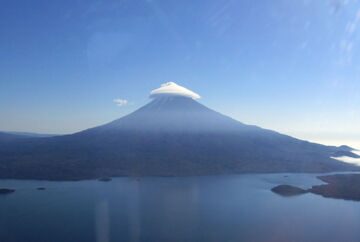 Day 1: Arrival.
Meeting at the airport. Transfer to the hotel. Bathing in swimming-pools with thermal water. Rest after flight. T

Day 2: Valley of Geysers, often referred to as the “The pearl of Kamchatka”.
Breakfast. Transfer to the heliport “Avachinsky”.
If the weather is cooperative fly to the Valley of Geysers, located in the Kronotsky Reserve. Fly-around Avachinskaya group of volcanoes: Korayaksky (3456m), Avacha Volcano (2741m), Kozelskiy, Arik & Aag . The flight takes about one hour and fifteen minutes, three hours are spent in the Valley and caldera of Uzon volcano.
The helicopter flight to the Valley of Geysers takes the route heads round the southern and eastern flanks of Avacha volcano picturesque coast and the Pacific ocean boundless. Flying low affords splendid views of the taiga landscape and as this valley is home to many brown bears, they can easily be observed from above. Often eruptions can be observed while flying over the Karymsky volcano. Northwards, the flight goes over Maly Semlyachik volcano with its spectacular crater lake of green water. Then you will explore the fascinating the valley of Geysers. Walking among the active geysers, strong burst of hot water and steam. 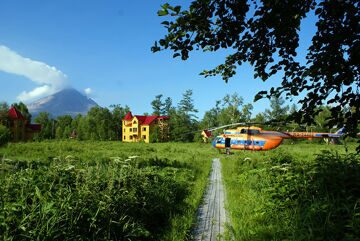 Then the flight will be direct to the caldera of Uzon volcano, which is situated on the territory of Kronozky reserve also. Caldera of Volcano Uzon was formed about 40000 years ago as the result of giant volcano destruction caused by a series of explosive eruptions. The tallest point of the caldera's slope (Barany peak) is 1617 m high above sea level, the bottom of the caldera is at 700 m above sea level. Numerous lakes, streams and rivulets in the caldera give birth to the Shumnaya river which flows into the ocean.
Then we fly to “Tumroki” resort .
The Tumroki is beautifully situated at the base of the towering Kizimen active volcano and is the most picturesque places of the Milkovskiy region. So it becomes a popular VIP tourist destination. Visitors are attracted to the lush landscape, high concentration of hot springs, and great outdoor recreation. The base consists of a three-storeyed hotel, two-storeyed canteen and a keeper lodge. In 300m from the hotel there are several pools with thermal water and a natural drinking water spring called Narzan. You can reach the springs by comfortable wooden paths lightened in the nighttime. After lunch you will have an opportunity to enjoy the bathing in natural hot springs. B, L, D, T. 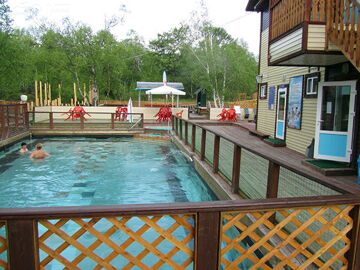 Breakfast. Fly-around Kluchevskaya group of volcanoes: Kluchevskoy (the highest active volcano in Eurasia -4835 m), Kamen (4575 m), Ushkovsky (4108 m), Krestovsky (3943), Ostry & Plosky Tolbachik (3682 m & 3085 m).
Plosky Tolbachik had strong eruption in 1976, as the result of which new volcano cones, surrounded by big fields of lava and scoria have been formed. During the flight you will discover incredible wonders around volcano, view lava flows, lava tubes, erupting vents and general rift zone areas which shows Tolbachik activity experience.
Refill in Esso. Esso is a lovely place with the scent of pine and friendly locals who live in picturesque wooden cottages (many of which let rooms cheaply). Locals like to call it the 'Switzerland of Kamchatka”; locals also go rather un-Swiss in heating their greenhouses for year-round tomatoes - tapping into the abundant hot springs. You’ll have a chance to enjoy the performance of national folk group.
The back route heads round unique natural phenomena: Karimsky waterfall, Verhne-Avachinsky lakes, Timonovskie Hot Springs or Nalychevo valley, the smaller cones of the Arik and Aag, which continue the line of volcanoes northwest from Koryaksky. Return to the Hotel. B, L, T. 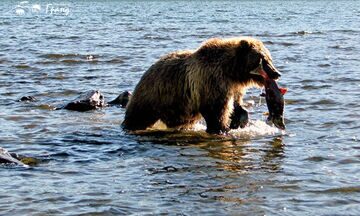 After breakfast flight to Kurilskoe lake for bear viewing.
Fabulous Kurilskoye Lake, one of the largest lakes on Kamchatka was formed by a volcanic eruption. Kurilskoye Lake is also the largest spawning ground for sockeye salmon and consequently attracts a large concentration of brown bears. The long spawning season also attract a diverse array of magnificent eagles, such as the Steller Sea Eagle, and White-Tailed and Golden Eagles.
From the lake flows the Ozernaya (Lake) river into the Sea of Okhotsk to the west. The lake is the largest spawning ground for sockeye salmon in Eurasia. Measurements of the numbers of salmon entering the lake and the spawning of juvenile fish are conducted by observation stations (manned by the Pacific Research Institute of Fisheries and Oceanography which is located on the western shore of the lake). Kurile Lake is a national wildlife preserve and a national monument.
Experienced guide will take you to view bears in their natural habitat. Here you'll have a good chance of taking great, close-up shots of bears fishing for migrating salmon. At Kurilskoe sockeye salmon spawn from spring until early winter and huge Kamchatka brown bears patrol the shoreline. The Kamchatka Bears are referred to as the Brown Bear because of their dark brown coat. 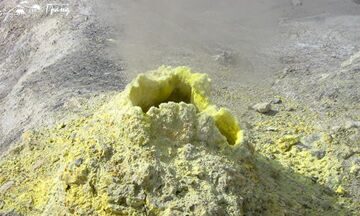 Their color is due in part to a diet of salmon, which are rich in oils and minerals. Their diet consists mostly of berries and small rodents. We will take hikes along the lakeshore, to the tundra, to a bear-viewing platform overlooking a salmon-filled river. You'll see bears fishing just a few step away from you.
Land in the crater of Ksudach Volcano, to have a lanch.
Ksudach Volcano is located in the frontal volcanic zone of Kamchatka. The only historically recorded eruption occurred in 1907; its fall deposit can be traced to the north for more than 200 km. This volcano is famous with two lakes (Stubel & Kluchevoe) with fresh water in the crater. You will be surprised with the fish living in the crater lake.You have lunch on the bank of the Kluchevoe take pictures and enjoy the view. These lakes, along with the hot springs and the surrounding wilderness, make the Ksudach Volcano region a popular trekking destination. Flight to Khodutkinskie Hot Springs, which flows into the river Khodutka. You can relax, take a bath in this place or just enjoy the nature.
All of these incredible things will never leave you indifferent. Return to the hotel.
B, L, T. 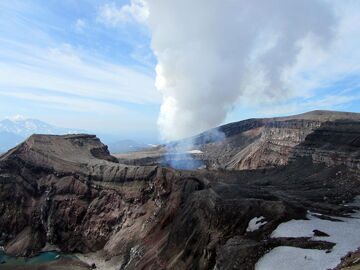 After breakfast drive by truck to Mutnovsky Volcano. Mutnovsky Volcano (2323 m) is situated 70 km south of Petropavlovsk-Kamchatsky in the Southern Kamchatka volcanic belt. The volcano has a composite structure. The structure is compounded by numerous cinder cones and lava flows erupted onto the slopes of the stratovolcanoes. There were at least 15 eruptions of Mutnovsky recorded in the historic times.
The tarred road lies along the west side of the flat valley floor. A dirt road begins at the end of the farmed land; this provides access to the Mutnovsky area. From the road there are views east to the splendid but inactive cone of Viluchinsky volcano, and north along the glaciated trough of the Paratunka Valley. The trucks will go as far as they can get.
The tourists will enjoy the walk up the gorge which is largely on banks of hard snow and firm ice that has accumulated in winter avalanches off the gorge walls. Much of the surface is covered in wind-blown ash.
Return to the hotel.
B, L, T

Day 6: Avacha Bay Boat Excursion.
After breakfast you will have the Avacha Bay boat excursion with fishing and Ukha (fish soup). Enjoy the fun and excitement of visiting Starichkov Island watching sea birds and mammals (6 hours in total). This tour is a unique opportunity to see the surroundings of Petropavlovsk from the sea, to explore the shores of the Avachinskaya Bay, and to watch colonies of seabirds in their natural habitats. A visit the fish market & souvenir shops. B, L, T. 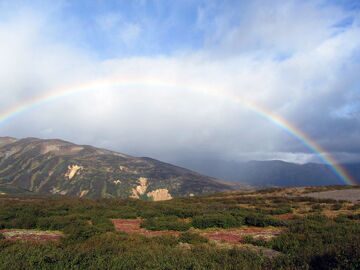 This day will allow you to relax a bit after our activities of the past few days.

• All transport, including ground transportation, transfers, helicopter etc.
• Flight to the Valley of Geysers & caldera of Uzon volcano;
• Flight to Kulilskoe lake;
• All excursions as noted in the itinerary;
• English speaking knowledgeable Tour Manager, interpreter, cook, guide;
• All meals as noted in the itinerary;
• All accommodations( DBL) as noted . For single accommodation additional fee -500 euro per person;
• All other entrance fees to preserves and reserves.

• International airfare
• Communication costs and other personal items
• All alcohol