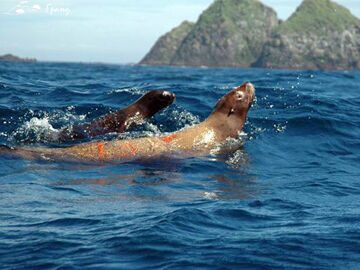 The Commander Islands are a group of treeless Russian islands located 175 kilometres (109 mi) east of the Kamchatka Peninsula in the Russian Far East, in the Bering Sea. The islands consist of Bering Island (95 kilometres (59 mi) by 15 kilometres (9.3 mi)), Medny Island (55 kilometres (34 mi) by 5 kilometres (3.1 mi)), and fifteen smaller ones, the largest of which are Kamen Toporkov (Puffin Rock, 15 hectares (37 acres)) (sometimes referred to as Ostrov Toporkov) and Kamen Ariy Island, which are between 3 kilometres (1.9 mi) and 13 kilometres (8.1 mi) west of the only settlement, Nikolskoye. Administratively, they compose Aleutsky District of Kamchatka Krai. The Commander Islands are the westernmost extension of the Aleutian Islands, though they are separated from the rest of the chain by several hundred miles. The relief is somewhat diverse, encompassing folded-block mountains, volcanic plateaus, terraced plains, and low mountains. The geologic origins are long-extinct volcanoes on the edge of the Pacific and North American Plates. The highest point is Steller Peak on Bering Island at 755 metres (2,477 ft). The highest point on Medny Island is Stenjeger's Peak at 647 metres (2,123 ft). The only permanently inhabited locality is the village of Nikolskoye on the northwest end of Bering Island, with an estimated population of 750 as of 2005. The population consists almost entirely of Russians and Aleuts. The majority of the islands' area, as well as much of the adjacent marine habitat (14,088 square miles (36,488 km2)), is taken up by the Komandorsky Zapovednik, a natural preserve. The economy is based primarily on fishing, mushroom gathering, the administration of the zapovednik, ecotourism, and government services. The village has a school, a satellite tracking station and a dirt airstrip south of the village.
Due to the high productivity of the Bering Sea shelf and the Pacific slope and their remoteness from human influence, the Commander Islands are marked by a great abundance of marine animal life and a relative paucity of terrestrial organisms. Notably, significant numbers of northern fur seals (some 200,000 individuals) and Steller sea lions (approximately 5,000 individuals) summer there, both on reproductive rookeries and non-reproductive haul-outs. Sea otters, common seals, and larga seals are likewise abundant. Indeed, the sea otter population is stable and possibly increasing, even as their population is falling precipitously in the rest of the Aleutian islands.
The neighboring waters provide important feeding, wintering, and migrating habitat for many whale species, many of which are threatened or endangered. Among these are: sperm whales, orcas, several species of beaked whales and porpoises, humpbacks, and right whales.[
The much less diverse terrestrial fauna includes two distinct, endemic subspecies of arctic fox. Though relatively healthy now, these populations had been significantly depleted in the past due to the fur trade. Most other terrestrial species, including wild reindeer, American mink, and rats have all been introduced to the islands by man. Over a million seabirds gather to nest on numerous large colonies along almost all the coastal cliffs. The most common are Northern Fulmar, Common, Brunnich's and Pigeon Guillemots, Horned and Tufted Puffins, cormorants, gulls, and kittiwakes including the extremely local Red-legged Kittiwake which nests in only a few other colonies in the world. Waterfowl and sandpipers are also abundant along the pre-lake depressions and river valleys of Bering Island, though largely absent from Medny Island. Migratory birds of note with critical nesting or feeding habitat on the islands include such species as Steller's Eider, Pacific Golden Plover, and Aleutian Tern. Raptors of note include the rare Steller's Sea Eagle and Gyrfalcon. In total, over 180 bird species have been registered on the Commander Islands.
The fish fauna in the mountainous, fast running streams in composed primarily of migratory salmonids, including Arctic char, Dolly Varden, black spotted trout, chinook, sockeye, coho and pink salmon. Bering Island was the only known habitat of Steller's sea cows, an immense (over 4000 kg) sirenian similar to the manatee. The sea cow was hunted to extinction within forty years of its discovery in 1741. The Spectacled Cormorant, a large essentially flightless bird in the cormorant family, was similarly driven to extinction by around 1850.[6 There is no true forest on the Commander Islands. The vegetation is dominated by lichens, mosses and different associations of marshy plants with low grass and dwarf trees. Very tall umbellifers are also common. There are no amphibians or reptiles. v The Commander Islands received their name after Commander Vitus Bering, who died there in 1741 after his ship St. Peter wrecked on the otherwise uninhabited Bering Island on his return voyage from Alaska. Bering perished on