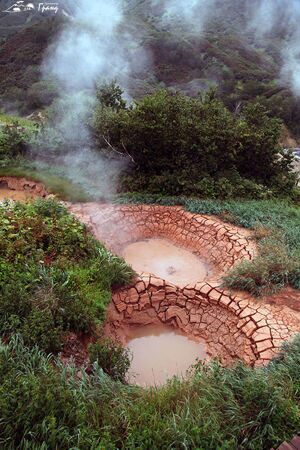 The Kronotsky State Biosphere Nature Preserve (also: Kronotsky Biosphere Zapovednik) is a nature area reserved for the study of natural sciences in the remote Russian Far East, on the coast of the Kamchatka Peninsula. It was created in 1934 and its current boundary contains an area of 10,990 square km (4,243 square miles). It also has Russia's only geyser basin, plus several mountain ranges with numerous volcanoes, both active and extinct, including Eurasia's highest active volcano Klyuchevskaya Sopka (Kliuchevskoi Sopka), which rises to a peak height of 4,750 m (15,584 feet).[1][2] Due to its often harsh climate and its mix of volcanoes and geysers, it is frequently described as the Land of Fire and Ice.
It is mainly accessible only to scientists, plus approximately 3,000 tourists annually who pay a fee equivalent to US$700 to travel by helicopter for a single day visit.[3] Kronotsky Nature Reserve has been proclaimed a World Heritage Site by UNESCO Over 750 plant species grow in the reserve, which has volcanoes rising up to a height of over 3,510m (11,500 feet). The nature reserve boasts over 700 brown bears, some of the largest in the world that can grow to over 540 kg (1,200 pounds). Bears in the Kronotsky reserve often encounter each other at salmon streams in the park where they can socialize freely with each other.
The Valley of Geysers is the only geyser field in Eurasia (apart from the Mutnovsky geyser field) and the second largest concentration of geysers in the world. This 6 km long basin with approximately ninety geysers and many hot springs is situated on the Kamchatka Peninsula in the Russian Far East, predominantly on the left bank of the ever-deepening Geysernaya River. Within the valley a volcanic cone collapsed approximately 40,000 years ago forming the Uzon Caldera, which continues to steam in places where magma can heat groundwater to a near-boil. The area is less that eight miles wide and holds at least 500 geothermal hot springs, mud pots and other similar features.
Among the geysers is the Velikan (giant) Geyser, which erupts with tons of water that shoot more than 25 metres into the air during a minute-long eruption approximately every six hours or so. At least 20 such geysers erupt on a stretch of the Geysernaya River Basin in the Valley of Geysers, along with dozens of smaller gushing vents and hundreds of hot springs. The largest of these geysers erupts with 60 tons of water once or twice a year.