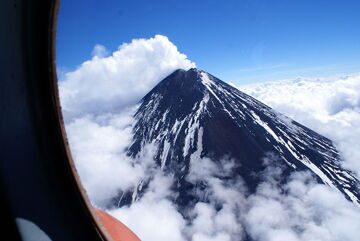 Kamchatka Peninsula is a 1,250-kilometre long peninsula in the Russian Far East, with an area of 472,300 sq.km. It lies between the Pacific Ocean to the east and the Sea of Okhotsk to the west. Immediately offshore along the Pacific coast of the peninsula runs the 10,500 metre deep Kuril-Kamchatka Trench.
The Kamchatka Peninsula, the Commander Islands, and Karaginsky Island constitute the Kamchatka Krai of the Russian Federation. The majority of the 402,500 inhabitants are Russians, but there are also about 13,000 Koryaks. More than half of the population lives in Petropavlovsk-Kamchatsky (198,028 people) and nearby Yelizovo (41,533).
Kamchatka receives up to 2,700 millimeters (110 in) of precipitation per year. The summers are moderately cool, and the winters tend to be rather stormy with rare amounts of lightning. Politically, the peninsula is part of Kamchatka Krai. The southern tip is called Cape Lopatka. The circular bay to the north of this on the Pacific side is Avacha Bay with the capital, Petropavlovsk-Kamchatsky. North up the Pacific side, the four peninsulas are called Shipunsky Point, Kronotsky Point, Kamchatsky Point and Ozernoy Point. North of Ozernoy is the large Karaginsky Bay and island. The spine of the peninsula is the Kamchatka or Central Range. Along the southeast cost is the Vostochny or Eastern Range. Between these is the central valley.
The Kamchatka River starts northwest of Avacha and flows north down the central valley, turning east near Klyuchi to enter the Pacific south of Kamchatsky Point at Ust-Kamchatsk. In the nineteenth century a trail led west from near Klychi over the mountains to Tegil river and town which was the main trading post on the west coast. North of Tegil is Koryak country, which is described as a desolate snow-swept plane. Just south of the headwaters of the Kamchatka, the Bistraya River curves southwest to enter the Sea of Okhotsk at Bolsheretsk.
There is a road from Bolsheretsk to Petropavlovsk and another from this road up the central valley (with a bus service) to Ust-Kamchatsk. The northern end of the road is of poorer quality. Apart from the two roads, transport is by small plane, helicopter, four-wheel drive truck and army truck.
Klyuchevskaya Sopka is an isolated volcano group west of Kamchatsky Point, southeast of the curve of the Kamchatka River. West of Kronotsky Point is the Kronotsky Biosphere Reserve with the Valley of Geysers. At the southern tip is the Southern Kamchatka Wildlife Refuge with Kurile Lake. There are several other protected areas: Palana is located in the Koryak area on the northwest coast and Tilichiki is located far up the Pacific coast.
The Kamchatka River and the surrounding central valley are flanked by large volcanic belts containing around 160 volcanoes, 29 of them still active. The peninsula has a high density of volcanoes and associated volcanic phenomena, with 19 active volcanoes being included in the six UNESCO World Heritage List sites in the Volcanoes of Kamchatka group, most of them on the Kamchatka Peninsula.
The highest volcano is Klyuchevskaya Sopka (4,750 m or 15,584 ft), the largest active volcano in the Northern Hemisphere [3], while the most striking is Kronotsky, whose perfect cone was said by celebrated volcanologists Robert and Barbara Decker to be a prime candidate for the world's most beautiful volcano. Somewhat more accessible are the three volcanoes visible from Petropavlovsk-Kamchatsky: Koryaksky, Avachinsky, and Kozelsky. In the center of Kamchatka is Eurasia's world famous Geyser Valley which was partly destroyed by a massive mudslide in June 2007.
Owing to the Kuril-Kamchatka Trench, deep-focus seismic events and tsunamis are fairly common. A pair of megathrust earthquakes occurred off the coast on October 16, 1737, and on November 4, 1952, in the magnitude of ~9.3 and 8.2 respectively. A chain of more shallow earthquakes were recorded as recently as April 2006.