The relief of Kamchatka 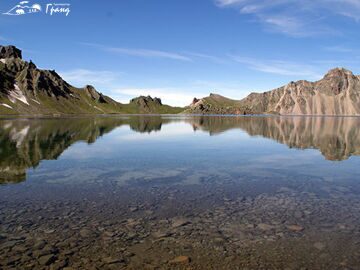 is located in a tectonically complex region at the junction of the Kurile and Aleutian subduction zones. The volcanic zone sits above the tectonic plate boundary, where the Pacific plate is sinking beneath the northeast edge of the Eurasian plate. As a result, the Kamchatka volcanoes are to a large extent andesitic stratovolcanoes. In other words, the volcanic zone includes explosive caldera-forming diacritic volcanic centers and also basaltic centers that produce more rapidly explosive cinder cones and shield volcanoes. Two major, majestic volcanic ranges lie in a northeastern line. The older, less active range occupies the central and western half of Kamchatka. The younger, most active begins in the southernmost point of the peninsula and continues upward along the Pacific coastline.
The Kamchatka Peninsula forms a portion of the far east coast of Russia. The Bering Sea separates Kamchatka from the Aleutian Islands of Alaska. The peninsula is characterized by cold winters but comfortably cool, damp summers with fog and drizzle.
Most of the calderas date from about 30,000 to 40,000 years ago. The present-day cones on the stratovolcanoes were formed in the last 20,000 years. The first noted eruption of one of the tallest, Kluchevskoye Volcano, was in 1697, when the first explorers reached Kamchatka. Frequent eruptions were also noted in the next centuries, with about 70 percent of eruptions taking place in the year 2000.
Kluchevskoye at 4,750 meters high is the highest and most perfectly formed volcano in Eastern Asia. But it is not the only volcano erupting frequently and continuously changing its altitude. In 1996 a Mount Karymsky eruption caused such an uplift that a nearby lake almost disappeared. Mount Karymsky continues to be active, spewing gigantic clouds of ash and steam followed by strong rumbling sounds.
The eastern coast of the peninsula is strongly indented, which forms large bays – Kronotsky, Kamchatsky, Ozernoi, Karaginsky and Korfa – as well as small bays, such as Avachinskaya, Karaga, Ossora, Anastasiya, Buyan, Vilyuchinskaya, Kommandor, Listvennichnaya, Medvezhka, Morzhovaya and Yuzhno-Glubokaya. A string of rocky peninsulars – Shipunsky, Kronotsky, Kamchatsky and Ozernoi – go far out into the sea.