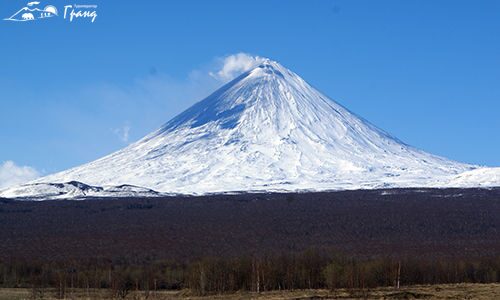 Klyuchevskaya Sopka (4750m) is a stratovolcano which is the highest mountain on the Kamchatka Peninsula of Russia and the highest active volcano of Eurasia. Its steep, symmetrical cone towers about 100 kilometres (60 mi) from the Bering Sea. The volcano is part of the natural UNESCO World Heritage Site Volcanoes of Kamchatka. Klyuchevskaya's first recorded eruption occurred in 1697, and it has been almost continuously active ever since, as have many of its neighboring volcanoes. First climbed in 1788 by Daniel Gauss and two other members of the Billings Expedition. No other ascents were then recorded until 1932, when several climbers were killed by flying lava on the descent. As similar dangers still exist today, few ascents are made.
Klyuchevskaya Sopka is considered sacred by some indigenous peoples, being viewed by them as the location at which the world was created. Other volcanoes in the region are seen with similar spiritual significance, but Klyuchevskaya Sopka is the most sacred of these. It is said that when the god Volkov created the world, this was the point at which he held it, and so it remains unfinished, unsealed, thus the volcanic activity.
Beginning in early January, 2007, the Klyuchevskaya volcano began another eruption cycle. On June 28, 2007, the volcano began to experience the largest explosions so far recorded in this eruption cycle. An ash plume from the eruption reached a height of 32,000 feet before drifting westward, disrupting air traffic from the United States to Asia and causing ashfalls on Alaska's Unimak Island.