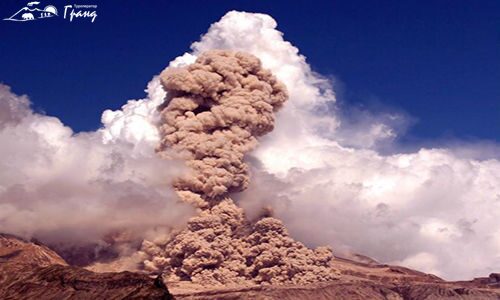 Following facts about Shiveluch (3283m) make it a unique volcano and attract attention of different specialists:
• it is considered to be the northernmost active volcano of Kamchatka
• it is noted for its unusual rocks, close to adakites, likely indicating its position over the northern edge of the subducting Pacific plate, warmed by mantle flow
• it is one of the most prolific explosive centers of Kamchatka, with a magma discharge of about 36x106 tons per year, an order of magnitude higher than that typical of island arc volcanoes
• it has experienced repetitive large flank failures, most recently in 1964
• Shiveluch volcanic edifice has a complex structure. Late Pleistocene Old Shiveluch stratovolcano, complicated at its western flank with a later lava field (Baidarny ridge), is truncated by a 9-km-wide crater enclosing Young Shiveluch eruptive center, active through the Holocene. Several Holocene domes have been also emplaced at the western slopes of Old Shiveluch.
Written records of Shiveluch activity date back to 1739 and include two large plinian eruptions, in 1854 and 1964, and more than 10 moderate dome-associated events, which produced minor pyroclastic flows and ashfalls. The last eruption of this kind in May 2001 caused 30-km long lahars. Due to its frequent and large explosive eruptions, Shiveluch poses hazard not only to towns of Kliuchi and Ust'-Kamchatsk, located at a distance of 45-85 km, but also for aviation pathways between the USA and all of the Far East.
Deep river cuts at the foot of the volcano expose a variety of its deposits. For example, a beautiful outcrop 13 km southeast of the volcano exposes two pyroclastic flow units and numerous fall and surge layers. Just few hundreds of meters up the valley we can see a debris avalanche unit, which is somewhat younger than the upper pyroclastic flow. Another few hundreds of meters up the valley - and above the debris avalanche deposit we see white, gray and black pyroclastic flow units, presumably related to the eruption immediately following the avalanche. In this way, tracing the pyroclastic units along the valleys and digging pits in places, where outcrops are lacking, we have mapped the deposits of the largest eruptions, which are often interlayered with organic-rich paleosols. In addition, many of pyroclastic flow units contain charcoals. Radiocarbon dating of this organic matter has allowed us to estimate the ages of Shiveluch tephras and reconstruct its eruptive history for the last 10,000 yrs. First results of these studies were published in Ponomareva and Pevzner.