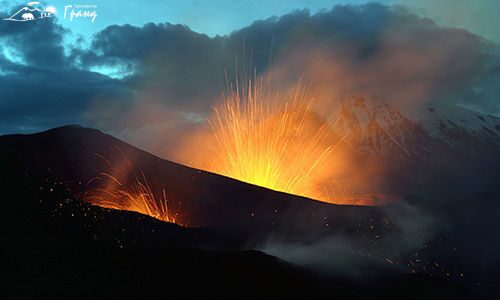 Tolbachik volcano and a lava field of the same name occupy the southwestern sector of the Kliuchevskoi volcanic group. Tolbachik volcano is built by two coalesced cones: Ostry ("Sharp") Tolbachik and Plosky ("Flat") Tolbachik. Both cones were built in the main by the end of the late Pleistocene and are composed of medium-K basaltic andesite .
In the beginning of the Holocene, a regional fissure zone started to form repeatedly producing high-K basaltic lavas different in composition from those of the stratovolcanoes. The zone crossed Plosky Tolbachik volcano and filled it with new high-K magma. After a series of flank eruptions, a 3-km summit caldera formed, which later was partly filled by a shield-like volcano now hidden under a glacier. A smaller caldera and a modern crater, intermittently filled by a lava lake, are located in the western part of the larger caldera . Weak historical eruptions from Plosky Tolbachik produced mostly ash. Extinct Ostry Tolbachik was partly destroyed by a sector collapse ~6.5 yr BP, probably related to the formation of the larger summit caldera on the adjacent Plosky Tolbachik.
Tolbachik lava field is a product of the regional fissure zone activity and is formed by numerous cinder cones and their lava flows. The zone first stretches for 40 km, from the southern tip of the field NNE towards Plosky Tolbachik volcano, then crosses the latter , and extends for another 14 km to the northeast. The zone resembles rift zones on some Hawaiian volcanoes. Peculiar feature of the Tolbachik lava field is that its lavas belong to two different series: high-K high-Al basalts, on the one hand, and medium-K high-Mg basalts – on the other. Low-viscosity high-K basalts were erupting here during the whole Holocene while medium-K high-Mg lavas appeared only since ~1700 yr BP . A minor amount of mixed lava varieties was also reported.
Tolbachik volcano and lava field became famous in 1975-76, when Kamchatka largest historical basaltic eruption occurred here. The eruption vents were located along a ~28-km-long fissure and produced both medium-K high-Mg and high-K high-Al basalts.
The eruption started on June 28, 1975, from weak explosions from the Plosky Tolbachik summit crater. Then, on July 6, the Northern cones started to form ~18 km southwest of Plosky Tolbachik . During 72 days three large cones and a number of lava flows were formed. The eruption also produced ~0.7 km3 of airborne tephra, which converted an area of ~400 km2 into a lifeless desert . Most of the erupted products were medium-K high-Mg basalt. During the last five days, however, the composition of the erupted rocks changed to high-K high-Al basalts with some transitional varieties. Total volume of the erupted products is estimated at ~1.18 km3.
Plosky Tolbachik volcano has been producing small amounts of ash of high-K high-Al basalt during the Northern cones activity, but at the end of the latter magma was withdrawn down the summit crater and a new collapse caldera formed. Soon after this and one day after the termination of the Northern cones activity, on September 17, 1975, a new eruption started ~10 km SSW of the latter. It lasted till December 10, 1976, and was mainly effusive in character. The eruption formed a single cone (Southern Cone), a large lava field and a minor amount of tephra. The erupted products were mainly high-K high-Al basalts with some transitional varieties in the beginning of the eruption.