On request from a group of 4 people on a jeep tour option at any time.

Detailed description of the route.

Arrival. Accommodation in hotel. Rest after the flight. 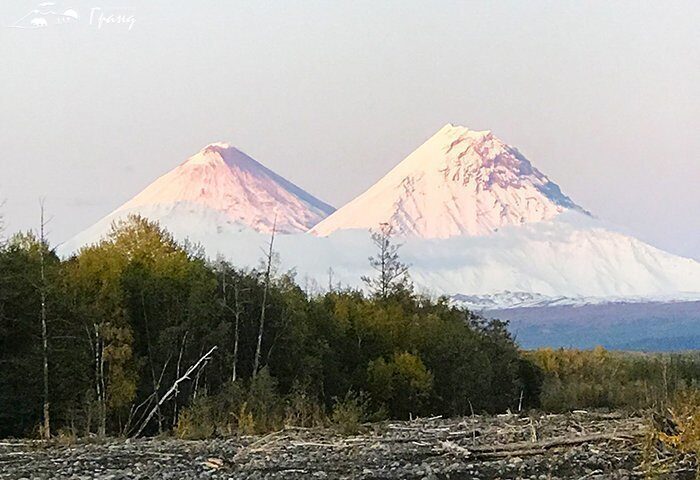 Day 1. Expedition to the North.

Early departure to the area of Flat Tolbachik. Transfer to the North 600 km with a stop for lunch in the village-Milkovo. Exit from the Federal highway. Stop for tea on the river Studenaya. Moving off-road (80 km-4-6 hours depending on the state of the road) to Tolbachinsky Dol. The breakdown of the camp. For those who wish there is the possibility of camping in the Dead forest. The name of the part of the foot of the volcano is Flat Tolbachik, in which the lava and slag of the 1975-76 eruptions covered the scorched surface, leaving only dry tree trunks in sight. Now. gradually the surface comes to life-there are young shoots of trees, shrubs and Alpine flowers. 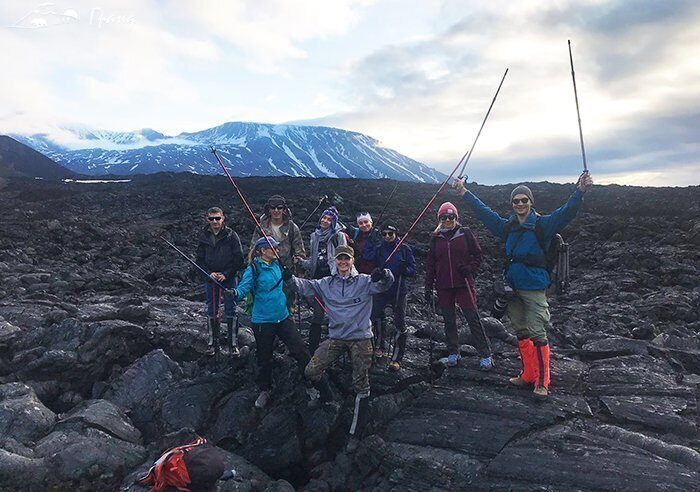 Day 2. Familiarity with the consequences of the eruption of 2012-13, which resulted in the formation of new volcanic cones, surrounded by huge fields of lava and slag. If the weather is favorable, the group will climb the volcano Flat Tolbachik (3140 m). The alternative is to carry out the program of the fourth day. 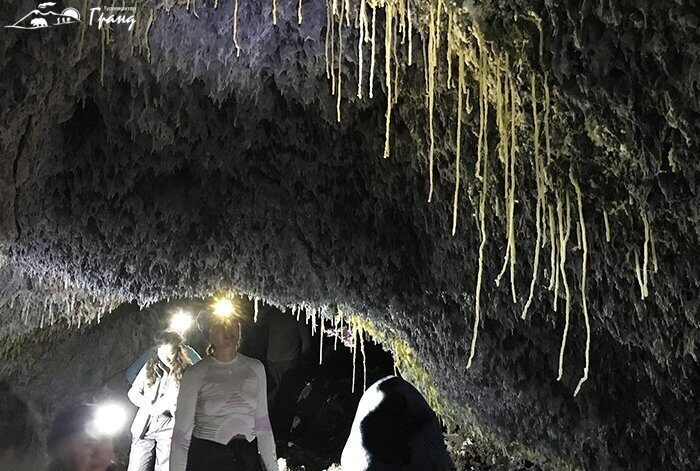 Day 3. On this day, an excursion will be organized to the caves with colored stalagmites and stalactites of volcanic origin, the cave «Chandelier», «Hot» temperature 100 C, «Bolshaya». The caves were formed as a result of eruptions in 2012-2013 and still store the heat of the earth. They can be warmed or quickly dried during bad weather. Next visit «Dead forest»,  natural object« Star », inspection btti 1975-1976 (height 200-300 m). In good weather, it overlooks the lava flows of the southern breakthrough, located 28 km South. 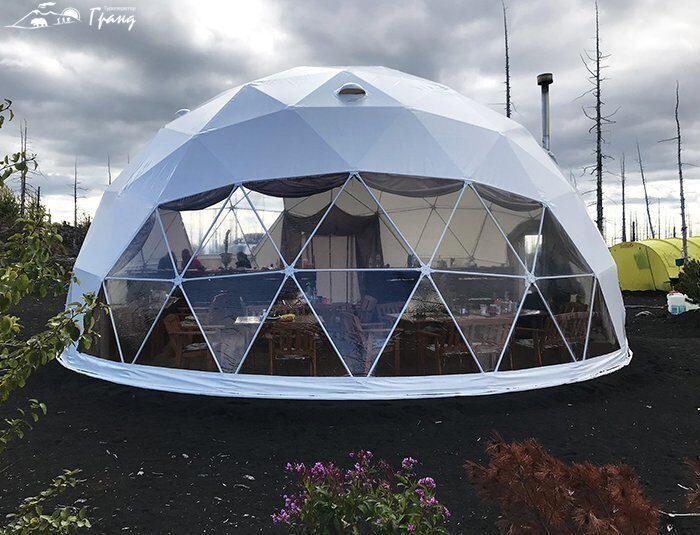 Day 4. Early departure in the South direction. In the evening, the group spends the night at the base with a thermal pool. 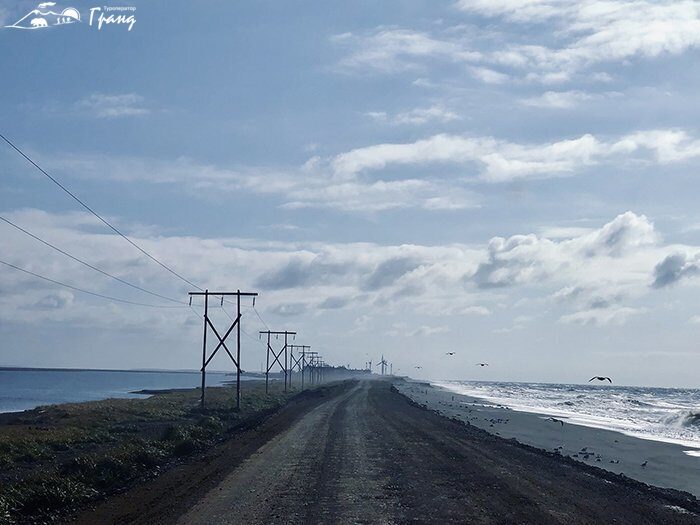 Day5. Check out after Breakfast on the coast of the sea of Okhotsk (named after the flowing river – hunting). One of the earliest names of the sea is Kamchatka. From the Peninsula, the coast is a low-lying surface with black sand, of volcanic origin, the coastline of which is slightly indented. The road to the village of Oktyabrsky passes along the spit located between the sea of Okhotsk and the Bolshaya river. The feeling is quite unusual, because the trip takes place on the road, on both sides of which – water! Oktyabrsky village meets its wind farms.stations, happily rotating blades. Crossings, and there will be 3, are carried out on ferries, which is also rare in everyday life. In the evening, after driving 400 km on various roads, the group is located on vacation in the village of Pauzhetka. 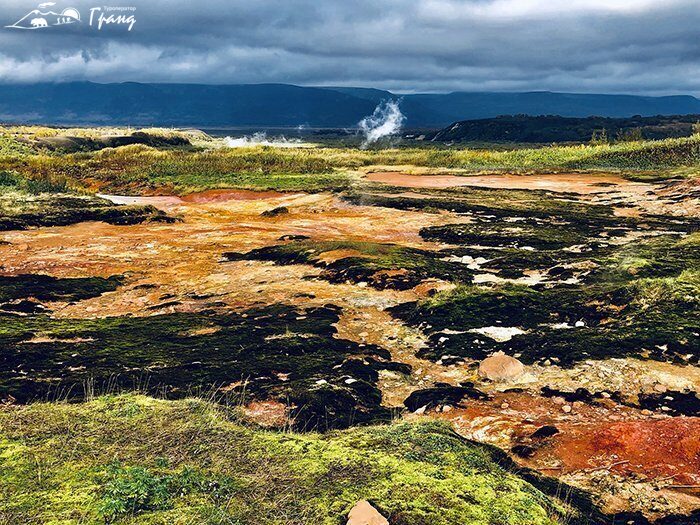 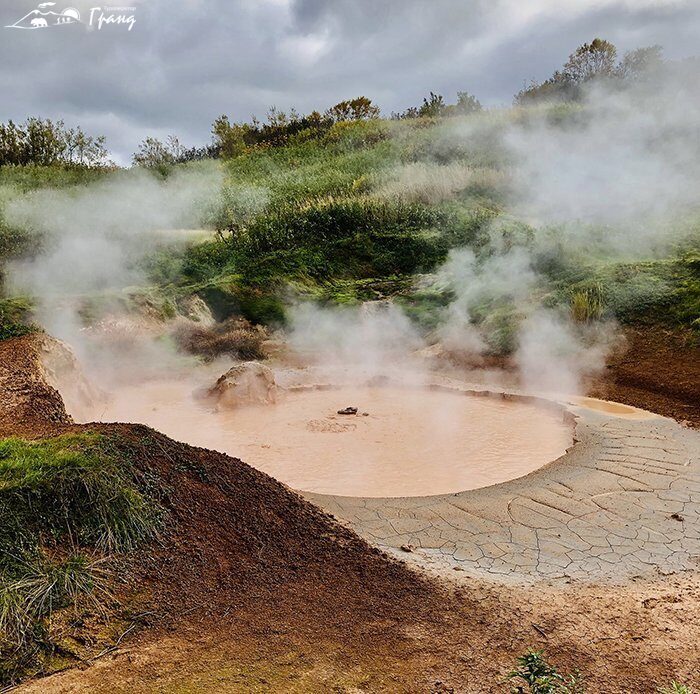 Pauzhetsky sources located in the valley of the river Pauzhetka, the largest left tributary of Ozernaya river. They resemble the springs of the Valley of geysers in miniature-the same phenomena, but on a reduced scale. They were first described more than 200 years ago by Stepan Petrovich Krasheninnikov. He noted that the keys “beat in many places like fountains, for the most part with great noise, one and a half feet high”. 2 geysers used to work here. With the beginning of the functioning of the Pauzhet GEOENERGY activity of geysers (Old and New) fell. Externally geysers almost did not differ from pulsating sources and, of course, conceded to beauty of geysers of the geyser river. For example, The new Griffin geyser had no water flowing out of a barely noticeable depression in the rough alluvium. Its cycle in 1965 was 30 hours; the period of gushing 45-60 minutes; the width of the boiling column 0.4-0.5 m; the height of water emissions only-20-30 cm. It is, of course, a baby, but still a geyser, a direct relative of large and beautiful geysers located in the valley of the geyser river! The cycle of the second geyser was 5 minutes. In it drillers, geologists warmed up stew and boiled eggs. That's why they called it " five-minute". 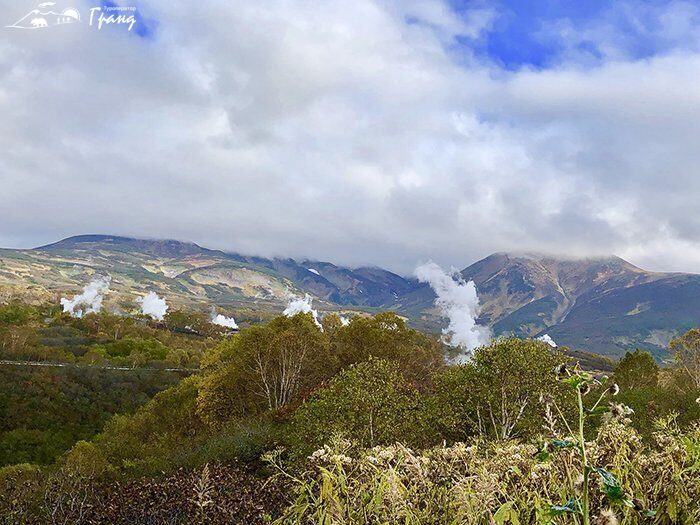 At the key site of the Pauzhet springs there are continuously bubbling griffins, throwing jets of boiling water and steam to a height of 1 m. the Springs are surrounded by a thin crust of geyserite. 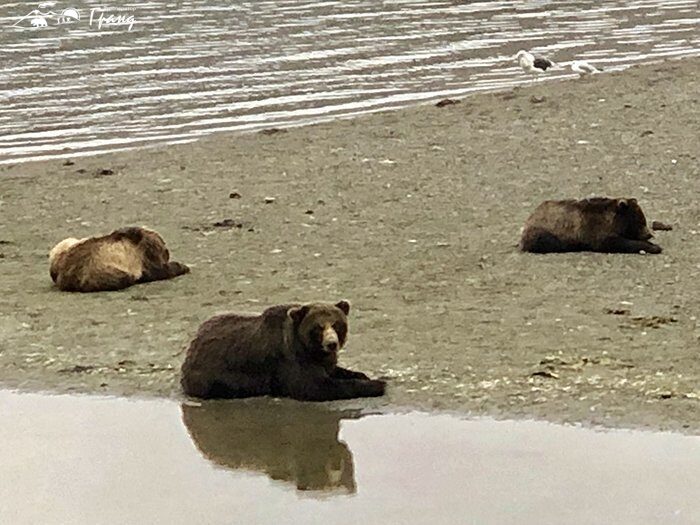 Early departure to the Kuril lake, located on the territory of the South Kamchatka Federal reserve, included in the UNESCO list of natural heritage in 1996 as part of the volcanoes of Kamchatka. The walk will take place along the Ozernaya river. In Kuril lake is fed by several rivers and streams: Hamycin, Atalink, Gavrushka, Vicencia, Cerused, and follows one river lake, which flows into the sea of Okhotsk. 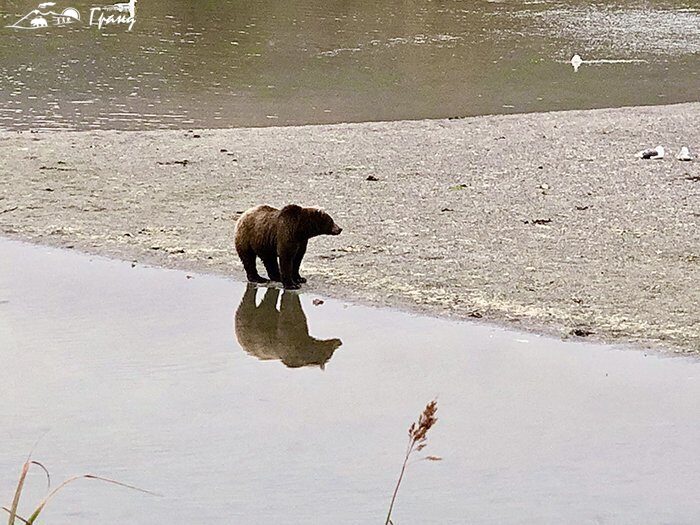 On the way to the lake (the route can take place on the transport of the reserve or on foot) stop to visit the observation deck on the Ozernaya river. A place where Kamchatka brown bears freely fish. Another 4 km and You are on the Kuril lake – the largest sockeye salmon spawning ground in Eurasia, on the banks of which you can meet bears fishing in their natural habitat. 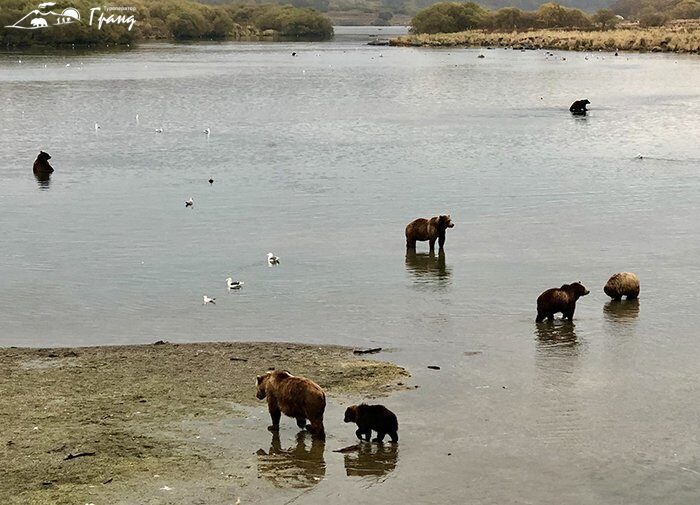 After observing the bears transition to natural monument – Kuthiny baht. 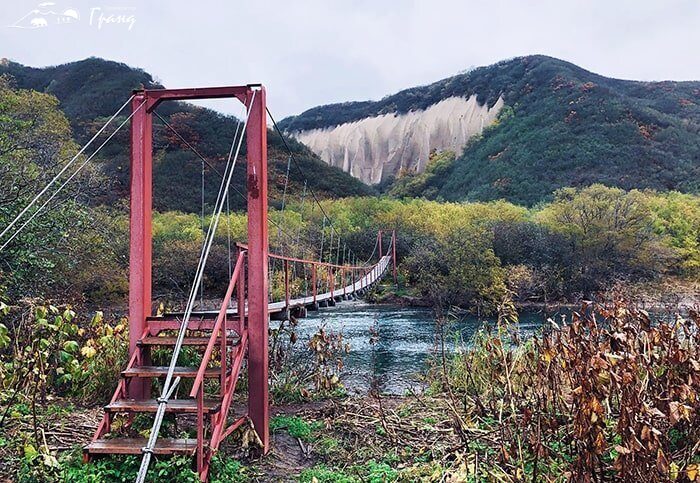 These are pumice rocks created by wind, water and volcanic activity. Stepan Petrovich Krasheninnikov, who studied Kamchatka from 1737 to 1741, told the tale of the Kamchatka Itelmen, who saw in the form of rocks huge boats-bats of the Supreme deity Kutha, left to dry, and they reminded the pioneer Cossacks of canoes. So there have been for several thousand years «forgotten» boats and waiting for their owner to go on a journey along the river to the sea. 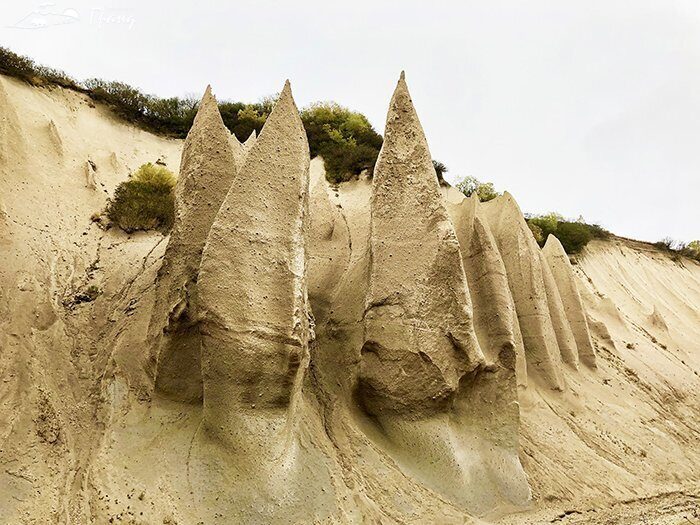 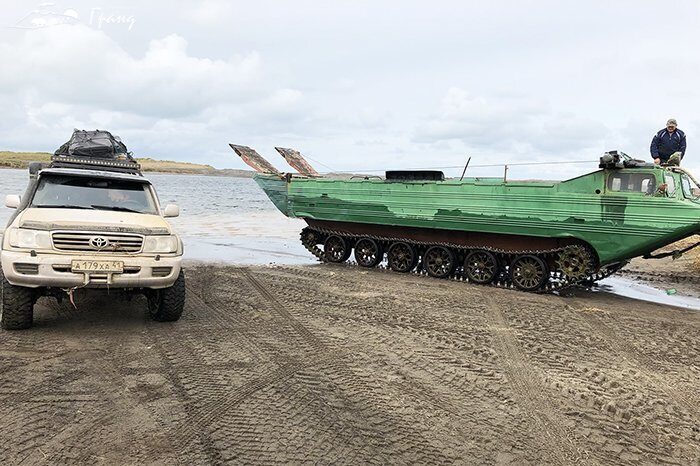 Dates of regular races and availability.

1. Accommodation: hotel-1 night, tents Tolbachik - 3 nights (surcharge for glamping on Tolbachik only on early request-5000 ₽ place / night), Pauzhetka tents / private sector 3 nights.
2. 3 meals a day on the route.
3. Guides, cook, guide on the route for a group tour -10 people.
4. All excursions on the program.
5. Fees Klyuchevsky Park for visiting the Park.
6. Fees of the Kronotsky nature reserve in the vicinity of the Kuril lake (UKS).
7. Payment for 6 river crossings.