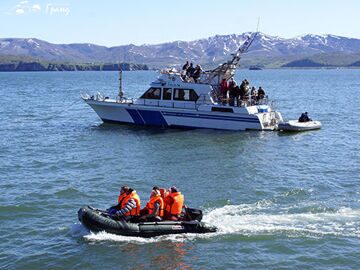 Avacha Bay is a Pacific Ocean bay on the southeastern coast of Kamchatka Peninsula. It is 24 km long and 3 km wide (at the mouth), with a maximum depth of 26 m.
The Avacha River flows into the bay. The port city of Petropavlovsk-Kamchatsky and the closed town of Vilyuchinsk lie on the coast of the bay. The Avacha Bay is large enough to fit any ship in the world. The bay freezes in the winter.
Avacha Bay was surveyed and mapped by Captain Mikhail Tebenkov of the Imperial Russian Navy in the 1830s.
Tri Brata is a set of three rocks at the entrance to the Avacha Bay. This picturesque stack, or rather kekur, is considered a symbol of Petropavlovsk-Kamchatsky. Local lore suggests that these are the three brothers who went to defend the town from a tsunami and turned to stone.
Most of these excursions follow the same route, heading out of Avacha Bay past the “Three Brothers” rocky pinnacles, through the mouth of the bay to Starichkov Island. Once the boats near Starichkov Island, seabird colonies are impressive, as the precipitous cliffs rise vertically from the sea and provide nesting habitat. Starichkov Island’s name comes from the Russian name for Ancient Murrelets, as the island boasts one of the world’s largest colonies. Other bird species include nearly 20,000 Tufted and Horned Puffins, Pacific and Red-faced Cormorants, gulls, and other birds. You may contact our advertisers for more information about bird watching cruises in this area.