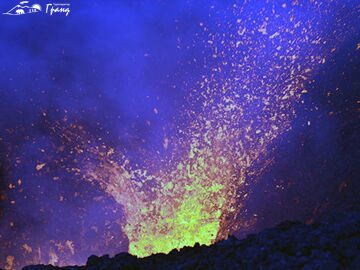 The Klyuchevskoy Nature Park, Kamchatka's most beautiful, untouched by civilization, and the youngest park, was founded in the 14th of December, 1999. In December, 2001 the park was included in UNESCO's List of World Heritage Sites in the nomination of "Kamchatka's Volcanoes". A visit to the park could be attractive primarily for those who are interested in the volcanic process of the planet. In the course of several days you may follow the history of the Earth's geological development from the moment of its birth to the current face. You may also visit the largest glaciers of Kamchatka -Bogdanovich and Erman, climb up to the craters of active volcanoes, and probably, witness some volcanic eruption.
The Klyuchevskoy Nature Park covers 376 000 hectares with 13 volcanoes and about 400 cones from incidental eruptions. The history of their origin and activity is variable and interesting. For example, in the result of the powerful eruption of Tolbachik Volcano in 1975-1976 a lot of forest hectares were covered with dejection. Since that time this place has reminded Mars' scenery. Travelling about the park you could visit the Dead Forest and see the tops of the dry trees above the 7-meter layer of volcanic debris.
One of the most active volcanoes - Bezymyanniy is located in the central part of the park. It erupts annually. Are you a mountaineer? If so, the ascend of Klyuchevskaya Hill and Kamen Volcano is for you. The volcano of Klyuchevskaya Hill (4750 m) is the highest active volcano of Eurasia. The park was called in favor of this fiery giant. In any season Kamen Volcano attracts the professional alpinists from all around the world giving the nice opportunity for ascends of variable complexity. From its summit one can see all of the Klyuchevskoy Park and the entire Northern group of volcanoes. The main goal of the park is to demonstrate to the people the beauty of nature in its original wilderness.
On the park's territory there are 7 nature monuments: Kamen Ambon, Sculpture Gorge, Rocky Woodpile in the system of Bezymyanniy Volcano cones "Dam", Snow Sheep Cliffs and Edelweiss Valley in the upper reaches of the Studyonaya River, Northern and Southern Breaches, and the estuary of the Kozyrevsk dry river in the western slope of the Ploskaya Hill. Flora and fauna of the park are diverse.
Here vegetate about 400 species of plants, come the calving of the snow sheep, locate the colonies of the black-capped marmot, range the species of wolverine, lynx, Kamchatka brown bear, and moose, nest the populations of wild ducks, geese, swans, Steller's sea eagle, and elack-billed Capercaillie. Birds and animals are not very fearful here because of the inaccessibility of the most locations and the visitors could watch them.