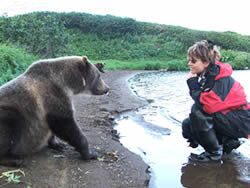 The Kurile Lake is a large caldera containing a crater lake located in the southern part of Kamchatka Peninsula, in the southern part of the Kamchatka reserve in Russia. It has an area of 77 square kilometres (30 sq mi) (the third largest by area of all lakes in Kamchatka and the second among the freshwater lakes, second only to Kronotsky lake). The lake has an average depth of 176 metres (580 ft), and a maximum depth of 306 m (1,000 ft). The lake is fed by snowmelt, rain and a few rivers and streams: the Etimynk, Hakytsin, Vychenkiya and Kirushutk. From the lake flows the Ozernaya (Lake) river into the Sea of Okhotsk to the west. The magnitude of fluctuation in the water level is one to three meters (the highest levels are from May to June and the lowest in April). The average water temperature off the shore is between six and seven degrees Celsius in September.
In the north-east coast is the dormant volcano Ilinskaya There are a few islands in the lake, the largest of which, Samang, is 0.66 km?. Other islands include Chayachy, Serdtse (Heart), Nizkii (Low), and Glinyanii (Clay). There are hot mineral springs in the area.
The lake is the largest spawning ground for sockeye salmon in Eurasia (if not in the world). Measurements of the numbers of salmon entering the lake and the spawning of juvenile fish are conducted by observation stations (manned by the Pacific Research Institute of Fisheries and Oceanography which is located on the western shore of the lake. On the shores of the lake brown bear are often sighted. Kurile Lake is a national wildlife preserve and a national monument. It is a UNESCO World Heritage Site in the listings of composition of the volcanoes of Kamchatka. Tourist access is by small plane from Petropavlovsk to Ozernovsky, by truck to Pauzetka, then by 6-wheel drive army truck and on foot.